If you have been to New Orleans, chances are high that you have come across several coffee shops selling their world-famous New Orleans chicory coffee.

A lot of people might still be unaware of this variety of the popular beverage, but chicory coffee has been in existence for quite a while, dating all the way back to the early nineteenth century in France.

Chicory, or the Cichorium Intybus Sativum, is a type of flower that grows in the wild. Bearing light purple flowers, this plant has edible roots that are roasted and then ground to make chicory coffee.

What is chicory and how did it end up in coffee?

The Chicory plant has been used over centuries for its medicinal properties and as a culinary ingredient. But the idea to add it as a coffee substitute came about around the early 1800s when Napoleon planned the Continental Blockade.

With the chief intention to starve Britain, Napoleon banned the entry of any goods exported from British ports. All ships sailing to France from different British colonies were stopped and their goods were confiscated. Different products not grown in France, like coffee, became unavailable and rare.

As a result, people started to add chicory roots to their coffee in low amounts. Eventually, when coffee became too scarce, they substituted the lovely coffee beans with ground chicory roots completely. This is why chicory is sometimes called the poor man’s coffee. The roasted roots of the chicory plant bear the same nutty flavour, though it does not have any caffeine.

When the blockade was lifted later, coffee became more easily available and the use of chicory subsided. However, the practise still existed and a lot of French colonies all over the world started to blend ground roots of chicory with coffee to create a unique, enhanced flavour. 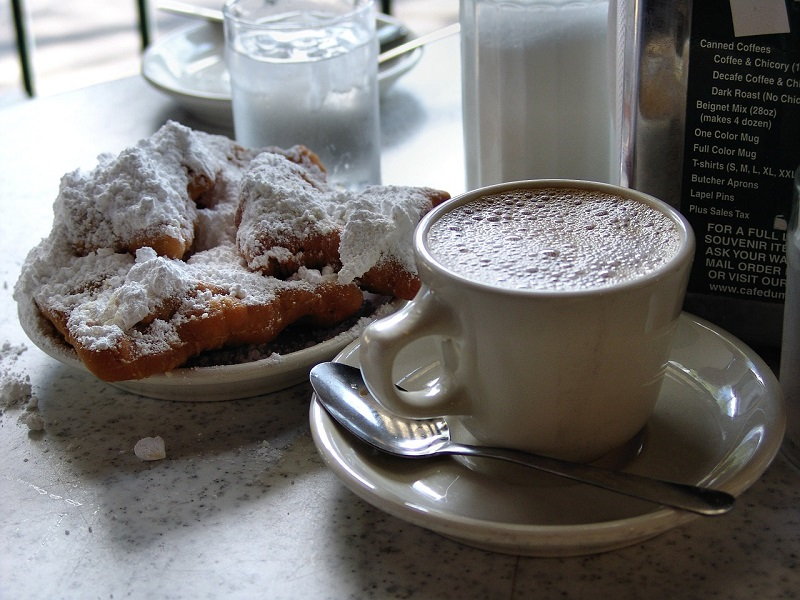 Chicory roots contain inulin, which get reduced during the processing. This gives the roasted chicory a sweeter taste. The overall flavour is quite nutty, and it works well to tone down the bitter edge of the ground coffee beans. This makes a mellow beverage with balanced caffeine.

The inulin in chicory is a probiotic soluble carbohydrate, which means that it dissolves well and creates a more full bodied drink. Sometimes the bitterness of chicory could be a bit overwhelming, and a lot of people water their beverage down with some milk.

This is the famous Café au Lait recipe where the chicory mixes with milk to give a chocolatey flavour to coffee.

What are the health benefits of chicory coffee?

Chicory has a herbal origin, and the health benefits are quite plenty. Chicory can be used as a coffee substitute, while giving the same nutty flavour. This is a healthier alternative to coffee, but can also be mixed with the latter to create a tastier drink with some health benefits.

Chicory mainly consists of inulin, which is a soluble carbohydrate that encourages friendly bacteria to grow in the intestines. These microorganisms help in digestion and keep our body clean from free radicals.

However, chicory needs to be boiled for a long time so that the level of inulin reduces. Too much of inulin can cause stomach cramps. Extra processing gives double benefits as the excessive inulin then releases a sugary taste, which heightens the flavour of coffee.

More research has proved that chicory coffee lessens the LDL or ‘bad’ cholesterol, maintains level of HDL and also reduces blood sugar. This helps in reducing risk of Type 1 and 2 Diabetes. Since it works as a tonic, it is often consumed to increase urine production and improve the health of liver.

Are there any chicory coffee side effects?

Handling the chicory roots directly could sometimes cause contact dermatitis. However, roasting the roots reduces risk. Chicory is a good nerve relaxant. If you are looking for a good coffee shot to wake you up in the morning, do not consume chicory as it will relax you instead.

Also, chicory can cause uterine contractions in women. While this is not dangerous, pregnant women could face complications. It is always advised to not have chicory with coffee during pregnancy.

Does the chicory root contain caffeine?

Research has shown that the chicory plant does not contain any caffeine in it. This is a big plus for coffee brewers who are looking for a mellowed caffeine impact when they have coffee. A lot of people blend their regular coffee with chicory, so that the caffeine intake reduces and the taste becomes smoother and more full bodied. It has been studied that a cup of chicory- blended coffee contains only one-third of the caffeine content found in instant coffee drinks.

While caffeine helps in enhancing the body function, too much of caffeine consumption can cause complications. However, chicory blended coffee does not carry any of those risks. By having chicory with coffee, people can keep their caffeine intake at a balance, while still being able to enjoy about 3-4 cuppa every day.

If you want to blend chicory with coffee, you need to first learn the ratio. The usual ratio of chicory to coffee could be as low as 1 to 3 or as high as 3 to 1. Depending on the type of taste you want, you can decide on the amount of chicory you should use with your ground coffee.

The recipe for chicory drink is the same as coffee. You can make chicory coffee using the same tools, like a filter coffee maker, a manual dripper, an espresso machine, an AeroPress or French Press. To dissolve chicory in water, use the same ratio that you would in case of coffee and water. Mix 2 tablespoons of chicory powder in every 6 ounces of water to dissolve it properly.

Chicory coffee can sometimes be a bit too bitter. In such a case, you could make Café au Lait, which is pretty famous in New Orleans. You just need to add half cup of milk to half cup of chicory and coffee mix. The result is a mellow caffeine hit with a more chocolatey delight. The process is quite simple:

You need to make sure that the chicory is heat treated so that most of the inulin converts into sugar and does not cause cramps. For this, you could boil the chicory coffee for ten minutes. However, the problem with this process is that boiling the beverage could burn the coffee oils as well.

The best method is to steep the chicory along with coffee, and then extract it at lower temperatures. It is better to brew these two ingredients together with the help of an espresso machine, use a filter machine or steep it in French Press, depending on your preference.

Chicory with coffee creates a beautiful drink with delightful aromas. While you can still enjoy the kick of caffeine, the herbal benefits of the chicory will improve your body’s immunity and keep you strong and relaxed.

How to roast and grind chicory