Most of us have heard of the iconic cartoon The Jetsons, where a futuristic family enjoyed the everyday conveniences of technologically-enabled contraptions such as flying cars, jetpacks and even a robot housekeeper.

I grew up watching reruns of this wildly popular animated sitcom, so naturally my imagination would run away with me as far as what “the future” would be like when practically every aspect of our daily life would be automated. Even though I’m much older now, I can’t help but think about the Jetsons when I utilise any type of smart home device, and if I’m being honest, it’s pretty much as cool as I always thought it would be.

So naturally, when I learned that you could program the Amazon Echo to turn on your coffee maker in the morning, I was all in. The utopian dream of voice-activated coffee brewing suddenly became real to me, and I set out on a quest to find a coffee maker that works with Alexa without too much hassle.

After doing quite a bit of research, I finally settled on the Smarter Coffee (2nd Generation) coffee maker, which is primarily controlled by the Smarter smartphone app, but is compatible with Alexa.

Now in my experience, in order for most appliances to achieve “smarthood”, there’s almost always some kind of convoluted setup process that seems to be more trouble than it’s worth. You have to log into multiple interfaces, figure out which devices use which communications protocols, and jump through other hoops before you can finally get the doggone thing to a place where it can hear your voice commands, interpret them, and respond accordingly. When it takes an act of Congress to simply turn an appliance on or off, it begs the question whether all of this home automation hullabaloo is really worth the effort.

But, I decided to endure the process of connecting Alexa with this smart coffee maker, and to be honest, it wasn’t nearly as bad as I thought. Here are the basic steps required to make it happen:

You’re all set after that. Now you can simply say “Alexa, turn on Coffee”, or “Alexa, turn on the Coffee Machine” to get things going. That’s pretty much the extent of what Alexa can do in terms of operating your coffee maker–it can turn it on and off.

Once the Smarter Coffee machine has been enacted, it will brew coffee according to whatever defaults are already present. If you want to expand Alexa’s capabilities to brew a certain number of cups or adjust brew strength, that will require a little more tech finesse via IFTTT (If This, Then That) applets, but I must confess that I really haven’t been inclined to take those extra steps as of yet. 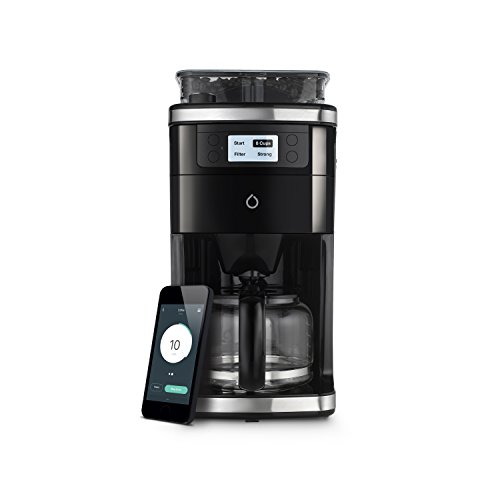 So after going through the fairly straightforward setup process, I was finally ready to try out my Alexa-enabled Smarter Coffee brewer. It happened on a morning when I was particularly groggy after working long hours the previous night, so I was eager (in a drowsy way) to experience the whole “master of my own domain” feeling by activating my coffee maker with nothing more than a voice command.

Mind you, there was a little bit of setup required before I could arrive at this point: I had to line the coffee maker (Smarter Coffee gives you both filter and bean-to-cup options), replenish the water supply and scoop the coffee grounds to prepare for the big moment, but I took care of all of these things the night before. I rolled out of bed and clumsily made my way to the kitchen, which is where my Amazon Echo finds its home. With a firm, four-word imperative – “Alexa, turn on Coffee” – I gave the decree that I expected my Smarter Coffee machine to obey.

Alexa responded with her trademark congenial “Okay”. Within what seemed like a split second, I could hear the coffee maker begin to cycle through its functions. I felt an odd sense of accomplishment, while also slowly realizing that the big moment was pretty much over. The Smarter Coffee maker was busy carrying out its duties, and life was clicking along as usual from that point.

While it wasn’t quite the “fireworks” moment I had anticipated, I did gain a sense of appreciation for all that the “Internet of Things” has introduced to society. I can definitely get used to this.