To say that I’m a fan of coffee would be a massive understatement. While I might not know how to fully describe my infatuation with this bean-derived beverage, I’m sure the word “obsession” could be thrown in the mix somewhere. Of course, the main catalyst behind my enthusiasm for coffee is the fact that I love drinking it, but it doesn’t stop there – I also love learning about it, reading about it, and expanding my knowledge of all things java. So you can imagine that when the British Library sent me a copy of Brian Williams’ “The Philosophy of Coffee” for review, I was thrilled to say the least.

For those who may not know, Brian Williams is a prominent blogger in the coffee space; he’s been running the blog “Brian’s Coffee Spot” for several years now, and has amassed a substantial following of like-minded coffee loyalists. In his blog, Williams typically writes about different coffee shops he’s visited in his various travels, highlighting the ones he loves instead of railing against the ones he dislikes. This positive and easygoing vibe is a hallmark of his blogging style, and it definitely translates over into “The Philosophy of Coffee“, which happens to be his first published book. 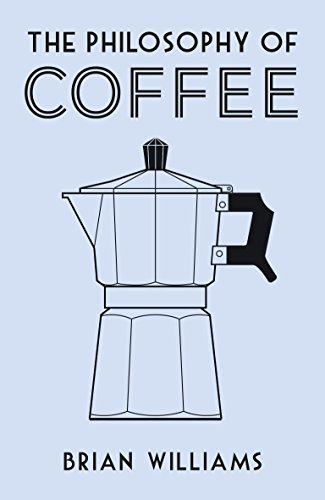 The book itself is quite stylish and artfully designed, with an air of refreshing simplicity that reflects the type of content found inside. At only 80 pages and roughly 15,000 words, “The Philosophy of Coffee” is a very easy read, but Williams skillfully manages to weave a lot of information into a compact format. He discusses the origin and discovery of the coffee bean in the northern parts of Africa over a thousand years ago, as well as a variety of fascinating tidbits and factoids about the history and culture of coffee throughout the centuries.

In his trademark relaxed and entertaining style, Williams also shares fun insights regarding the rise of coffee house culture, the birth of espresso, various times when coffee has been legally banned, and Brazil’s prominence in the coffee world, among many other topics. While the information Williams shares is well-researched, the book is not intended to be an exhaustive history of coffee, and it’s far from a dry read.

Some of the most interesting and memorable tidbits that I gathered from the book include:

I could go on and on, but suffice it to say that Williams has loaded his book with dozens of coffee-related gems that are just plain fun to learn about.

The book also contains 15 fascinating illustrations that have been sourced from the seemingly bottomless British Library collection. One illustration that I found particularly intriguing was a label for “Uncle Sam’s Coffee“, which included an image of Uncle Sam lounging on top of an old military cannon, apparently whittling a wooden stick amid trademark patriotic objects such as the American flag and a bald eagle. Old vintage advertisements from the late 1800s and early 1900s have always been a favorite of mine, and among those that marketed coffee during that time, this one definitely stands out. But, I digress.

I would definitely recommend this book to anyone who has even a cursory interest in coffee, as it is far from being a tome reserved only for the “java cognoscenti”. “The Philosophy of Coffee” is a warm, inviting and fun read that offers plenty of enrichment for fans of this irresistible beverage, and it would make a great addition to any coffee lover’s collection.