Although tea drinking in England is not as popular as it once was, tea is still a common part of everyday life. These days, few people set up a formal tea time every day, but we still enjoy our cuppa. What’s the best way to make a single cup of tea? In this article, we will discuss using a tea cafetiere to brew loose-leaf tea. We will also present a few other options. Read on to learn more.

What is a cafetiere?

This is just another term for a French press which is commonly used for making coffee. Since its inception, the design has been modified a number of times. The model we use today is made up of a very narrow cylindrical pitcher or beaker that is usually made of durable clear plastic or glass. This pitcher is fitted with a plastic or metal lid that is outfitted with a plunger. The plunger fits into the cylinder perfectly and includes a mesh filter made of nylon or very fine wire. 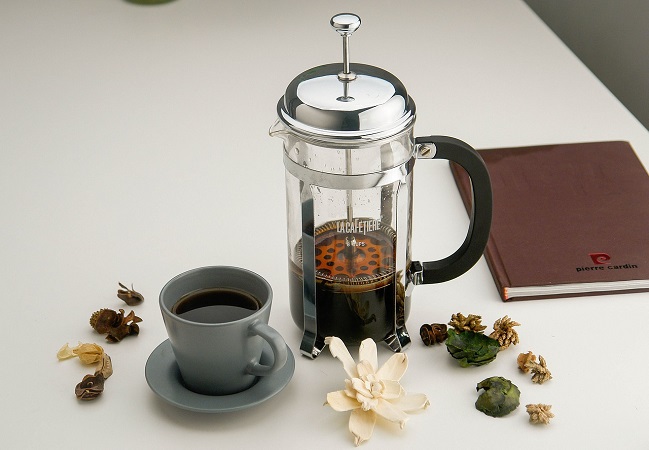 To use a French press for coffee, you would measure coarsely ground coffee into the bottom of the pot add hot water and press the grounds with the plunger to release the flavour and separate the grounds from the water. This same concept can also be used when brewing loose leaf tea.

What are the advantages of brewing tea with a French Press?

When you brew your cuppa with a French press, you can make a single cup of the most flavourful tea quickly and easily. Tea connoisseurs agree that loose-leaf tea imparts a far more nuanced beverage than teabags.

Another great advantage is that you can get more value from your tea when you use a French press. Because you can reuse the same tea leaves two or even three times. Far from being unnecessary penny-pinching, this method actually allows you to enjoy even greater flavour from your tea purchase. Experts agree that the second and third brewing bring out more subtle flavours from loose-leaf tea and add greater enjoyment to tea time.

Things to be careful of when using a cafetiere for tea

One thing you must be careful of when using a French press instead of a tea infuser to brew your loose-leaf tea is that you cannot let the leaves sit in contact with the water for a long period of time. This can cause the tea to become bitter. Instead, you must measure exactly the right amount of water for the amount of tea you wish to enjoy now. When steeping is complete, pour all the water out into your cup so that the leaves will not continue to steep while you enjoy your first cup of tea.

Some people who have used this method of brewing loose-leaf tea say that it is better to put the plunger into the decanter first and then add the tea. With this method, you would simply allow the tea to steep in the hot water for the desired period of time and then pull the plunger out taking the tea leaves along with it. When you do this, reusing the tea leaves may be quite difficult or even impossible.

Others who have used this method say that it is very important not to press on the tea leaves. They say that instead you should simply allow the leaves to sit and steep for the desired period of time and use the presser to prevent having leaves pour out into your teacup when you are ready to enjoy.

As with all coffee and tea brewing apparatus, you must be careful not to use the same French press for brewing both tea and coffee. Although some people say that it is possible to clean the cafetiere well enough to avoid co-mingling of flavors, this is actually seldom true. It is far better to simply use separate apparatus for tea and coffee than to ruin both with crossover flavours.

What are the disadvantages of using a French Press to make tea?

Some tea connoisseurs say that the shape of a French press is not conducive to good tea brewing. They argue that the round bellied shape of a teapot has a purpose, and that is to allow the leaves to swirl and unfurl properly for full flavor. Those who prefer to use a French press say that gentle pressure serves the same purpose. In the final analysis, this is really a matter of individual preference and you will simply have to decide for yourself.

Others say that using a French press to brew tea does not work well for any type of tea but black tea. They hold that using tea leaves two or more times is not workable with a cafetiere. Again, this is something you will have to decide for yourself.

Other ways to make a single cup of loose leaf tea

Naturally, you can use teabags to make single cups of tea but real tea connoisseurs say that you will not get the best flavour from bags. The reason for this is that the leaves do not have the freedom to swirl, unfurl and impart completely nuanced tea flavour. Additionally, using loose-leaf tea means less waste and clutter in the environment and more value for your tea pound!

To make a single cup of tea, you could use an old-fashioned tea-ball. This sort of contraption is simply a metal or wire mesh basket into which you measure a well-rounded teaspoon of tea leaves. Close it up and steep it in your teacup just as you would a teabag. The unfortunate thing about this solution is that a tea-ball inhibits the unfurling of the tea leaves just as a teabag would. It does reduce waste and clutter in the environment though, so it is in some ways a good idea.

A tea infuser is a plastic or wire mesh basket that fits perfectly into your teapot or mug. To use this, you would measure the right amount of tea into the infuser, set it into your teacup or mug and add hot water. Cover and steep for two or three minutes and then simply lift the infuser out. The concept of this is the same as using a teapot, but you are just making one cup at a time. When you do this, it’s easy to use your tea leaves two or three times to get the most flavour and the most value.

Another very simple way to make an individual mug of tea is to simply measure the tea into a microwave safe measuring cup. Add cold water and microwave in one minute increments (stirring in between) until the water is almost to the boiling point. Leave the cup in the microwave, cover it and allow it to steep for two minutes and then pour through strainer into your cup or mug. Using this method you can also use your loose tea leaves two or three times. Some tea purists may be opposed to this method, but it is a way to step into the 21st century and still enjoy your tea.